Pasta stocks: actually ate some pasta! Now feel morally better about owning so much, even though this is just apparently how much pasta I own, rather than stockpiling (except all that stuff I swapped for coffee and kidney beans). As such, now own:

(Am I going crazy, or does that not feel like much pasta? Feel uneasy. Wish I hadn’t counted)

Oh, plus ¾ of a cooked roast veg and lentil lasagne.

(Although to be fair, Niece is quite vocal about her physical boundaries, so I don’t get to hug her that much anyway)

Mum’s top tip of the day: told mum about mum’s top tip for the day. Asked her to give me some advice for my blog and she was v. Confused, and later mildly disgruntled and not forthcoming with advice.

The next day I got this, which has left me mildly scarred for life, but I suppose means we’re even again. 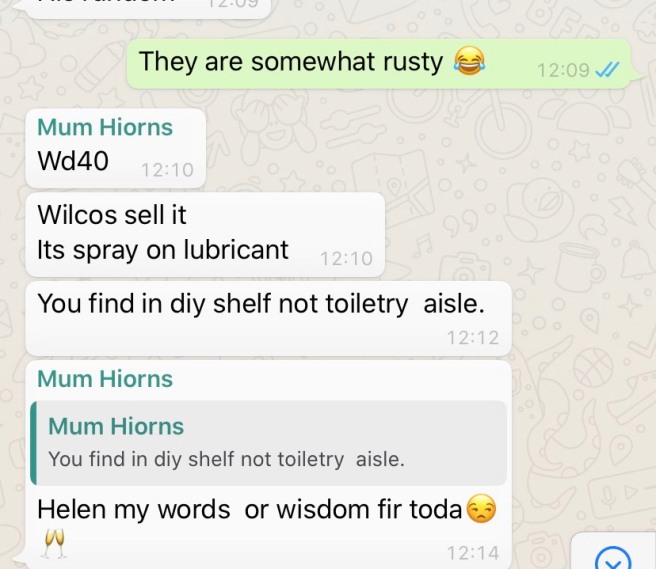 Mixed reviews for lockdown so far.

Keep having really lovely moments, then moments of piercing sadness when I realise things that I’m not going to have for a long time.

We usually meet up once a month, which I think is pretty damn good given general adult friendships and the fact that we’re all living in different parts of the country. We’d intended to meet next weekend with all of us, then the three of us go away the following week (Sheffield beloved bestie’s girlfriend had uni essay so she couldn’t come with).We knew holiday wasn’t going to happen, but we thought that maybe we’d just semi-self-isolate some place together for the week we all have off work, and play games and hang out anyway. Sheffield beloved bestie had started stockpiling sangria (correct type of panic buying, I think).

The three of us have gone away once or twice a year since our second year of university (six years?? Is that right?) and I know this makes me V. V. Privileged, but please never think I am not aware of this. FULLY understand that my middle class existence of lockdown is an entirely different and more internal focused hot bed of pressure, but not financial. Am INCREDIBLY blessed to have secure income and enough wider security that if it all went tits up I could call my parents and they could help me. The lack of fear is the real definition of social class, for me , and I would hope to never walk into a room without an awareness of how my privileges and advantages has led me to a place of living confident that I can be self sufficient.

That being said, I really flipping love our holidays. We read books and swap books and drink cocktails and make iced coffees and do puzzles and watch tv in the evenings all hauled up under blankets. We play card games and sit on the beach and I burn like a crisp, despite commitment to factor fifty, so each holiday they take pictures of my sunburns for prosperity. They have like six different pictures of my burnt arse.

I get migraines and I have done for a very long time. I’ve just lived with it due to my mild phobia of going to the doctors and because I kinda figured they couldn’t do a whole lot about them. In our November meet up, I had a SUPER BAD migraine. Wound up throwing up five or six times and spent about two hours of the day out of bed. Was staying at Sheffield beloved bestie and girlfriend’s place and sharing a bed with other beloved bestie, and at the point we were all going to bed I just cried, and part of it was because my head hurt so much every time I moved my head that I kinda wanted to cut the damn thing off my neck, but also because I’d lost the whole Saturday that we were gonna spend together. I cried into one of her pillows (while keeping head v. Still) and decided that I was going to freaking well deal with these migraines, because they were not going to cost me my monthly weekend with beloved besties again.

(Booked first available doctors appointment online the following week, which was in eight weeks time. I think I could have got an appointment earlier if I had called them. Obviously I did not do this because phones.)

There have been some more tears since BJs announcement. I am a cryer, anyway. I once cried at a Tescos ‘food love stories’ advert. I’ve cried at the song ‘Rockabye’ and I have cried at that bit in Angus Thongs and Perfect Snogging (this reference is depressingly retro) where she turns up at the party dressed as an olive and then runs away.

Most awkward tear-fest of the past few days was in work check-in, a new daily occurrence where each member of the team talks about how they’re doing. Well, I thought I was fine, and then people starting talking, and I Was Not Fine. Cue tears. Cue trying to suppress tears. Cue internal battle as to whether to leave virtual meeting for a moment. Cue my turn to share how I’m doing.

I say hi. This means that everyone now gets a view of my face on their laptop. My voice cracks. I see myself on the screen. I do not know what to say. Am now crying on video chat in front of all my work colleagues. Panic. Commit to PEAK DRAMATIC EXIT, and shut laptop and leave the room. Now start to sob like teenagers do in films when they’ve been grounded: throw myself into my bed, hug pillow, and sob. Can hear meeting going on in background because shutting laptop doesn’t actually remove me from meeting. Head of Department awkwardly moves the conversation on. They pray for me (we’re a Christian bunch, we pray for everyone, not just people who run out of virtual meetings to cry, although you should always pray for people who run out of work meetings to cry) while I sob on my bed. Am still half wearing my PJs and have a meeting with all of them immediately after check in.

Compose self. Make coffee. Get properly dressed and put on lipstick. Seamlessly join meeting like nothing has ever happened.

As soon as I start work, feel completely fine again.

That evening, really enjoyed praying with my church group and then had the best time with the besties from afar, and it all felt like it could be a fun kind of challenge again.

Plus, we have another distanced meet up scheduled for this weekend!!

Got to that point during Tuesday evening when I started losing a little of my tunnel vision and really feeling, instead of knowing, that this isn’t an IDEAL situation for anyone. There was a few moments before that when I wanted to scream BUT I’M ON MY OWN. YOU’VE GOT YOUR SPOUSE OR YOUR KIDS OR YOUR PARENTS OR YOUR HOUSEMATES AND ALL IVE GOT ARE MY PLANTS AND I’M PROBABLY GOING TO KILL THEM ALL SOON.

But, I am an introvert, and I think I’m going to do a lot better with this than I would with a fictional other half and kids, and I don’t really think it’s worse to be on your own, it’s just different.  Then I started thinking about friends who just about get on with their housemates, and friends who love their housemates but, you know, appreciate the evenings they go out A LOT, and I started thinking about those poor extroverted outdoorsy types, and I more or less got round to being back to ‘this time is a gift. Freaking well use it’ when I had a sudden moment of like is my mother okay???

Parents visit my sisters a lot. Not me so much, but that’s because I haven’t produced a grandchild / don’t need any decorating doing. I live close enough to “Awesome Sister” that I nip across when parents are visiting them, and that’s… not going to happen for a while. Started to become concerned that the fact that we didn’t play a family Ticket to Ride Game last night was symbolic of my mother not being okay.

Was on a group call with “Awesome Sister” and dad, so asked how mum was. He called her into the room by saying we were on the phone and she didn’t come for twenty minutes because she was watching a TV program about funerals.

My mother is fine.

Really, we need to be thinking about the drug dealers and the house breakers.

Woke up Wednesday, looked at the pile of PJs on my bedroom floor and had a moment of extreme clarity: that I needed to get over myself and do my bloody laundry.

This was very grounding and helpful.

And, shed key was in the little pot hanging off the washing line with the pegs in! Shed key has been missing since my birthday party (September) and now I have an almost memory of someone telling me they put the key there, but I could just be filling in a blank. It hasn’t really been warm enough to dry clothes outside since then, though, so poor keys have mostly been chilling with my pegs in a puddle of rainwater for 6 months.

(Thus the rust conversation, thus my mother’s tips about purchasing lubricants. Hope I never have to write that sentence ever again).

Also, may have tried to break into shed using a screwdriver before using the screwdriver to unscrew the hinges on the door, so there was a hairy moment when I thought I’d broken the lock, but no!

Have access to my shed!! This would never have happened without lockdown!!

(Until I did laundry that I hung on the line, at least).

Also, there is a 83 acre park opposite my house, that I have been in twice before lockdown. 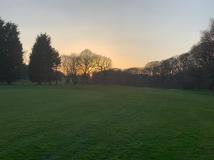 So, new routine is my Allowed Walk after work. Still spending breaks painting and drinking nice, slow, ground coffees in my conservatory. Still starting most days at 9:30 and eating breakfast. Probably feel more relaxed than I ever have in my life (if you ignore the crippling fear that I’ll never be lawfully allowed to hug anyone else again) and am looking forward to spending the weekend reading a book in my garden.

Need to put the other twelve screws back in the shed door not that removing hinges isn’t my access route.